What Do We Mean by Suri Phenotype?

A detailed look at what makes a Suri a Suri.

We often hear judges refer to suri phenotype when giving their oral reasons for placings in the show ring. Another term – “typey” – also refers to how well the animal exemplifies suri phenotype. For the newcomer to suri alpacas, these are elusive terms. What do we mean by the term “suri phenotype?”

“What Do We Mean by Suri Phenotype”
by Gail Campbell, DVM (1.8MB PDF) 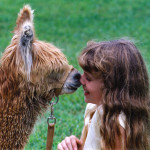 Gail Campbell, DVM of Ameripaca Alpaca Breeding Co. has been a Suri breeder since 1994. She has been active in the Suri Network as past president, marketing committee member, and editor of Purely Suri magazine. The below article in PDF format was first published in 2003, and subsequently, this revised article was published in 2010.

Business hours: Monday–Friday 8 am to 3 pm
by appointment only!

Ameripaca offers education, guidance, and full-time veterinary support before and after your purchase. With over 29 years of experience, a veterinarian-owner, and over 2,000 crias birthed, Ameripaca has the real-world knowledge sought after by both new and experienced alpaca breeders.

We Cater to New Alpaca Breeders

Ameripaca is home to 12 PREMIUM herdsires from a diverse selection of award-winning bloodlines. Tap into this incredible pool of alpaca genetics when you breed your female alpaca to one of our outstanding studs—or purchase an Ameripaca alpaca!

Ameripaca has offered industry-leading guarantees and customer support since 1993. We offer all-inclusive stud services with no hidden fees, bred females with live-birth guarantees, and 100% customer satisfaction. Ask for details.